Brighton stages meetings throughout the summer and the racecourse has views over both the sea and the city. It hosts a three-day festival in August including the most valuable race in its calendar, the John Smith’s Brighton Mile Challenge Trophy. The handicap is open to three-year-olds and older horses and regularly attracts sizable fields.

Racing on the downs high above the city, runners over 12 furlongs at Brighton have to negotiate left and right turns as well as a sharp downhill descent into the straight before a stiff climb to the line. For that reason, comparisons are drawn between Brighton and Epsom, though other tracks such as Goodwood, Lingfield (turf), Salisbury and Bath are not dissimilar. 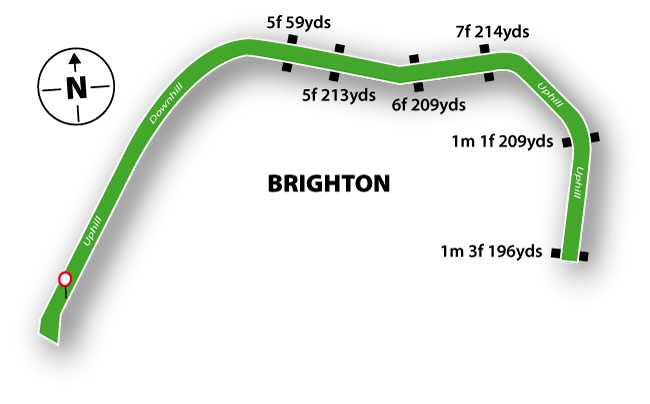 Left handed, sharp. 'U' shaped and around twelve furlongs in length, the pronounced gradients make it a track for handy types rather than big, long-striding sorts, though those very enterprisingly ridden can be caught out by the uphill finish. A course where bunching on the rail can occur due to the camber towards the inside of the track, especially in races contested by inexperienced sorts, many tending to hang. When the ground gets testing it often pays to switch towards the stand side inside the last three furlongs.


Horses need to handle all sorts at Brighton, with left-hand and right-hand turns, an uphill section and a sharp decline. That combination catches out a lot of runners. It can be ideal for what you might call ‘clever’ types, though, because the stables are at the end of the straight, so horses are running back to where they’ve come from after the home turn. What you can’t afford to do is get one unbalanced coming down the hill. If you do, you’ll struggle to get back on an even keel for the run to the line.