The head handicappers at the BHA review the pick of the recent action from Doncaster's St Leger Festival; updating ratings for the likes of Galileo Chrome, Chindit, Indigo Girl et al.

unibet
Up to £40 in bonus funds

The Pertemps St Leger shows that tiny margins and moments make huge differences. After three minutes of battle, less than a quarter of a second separated the first four horses over the line, writes Matthew Tester.

Galileo Chrome gets a rating of 117 for winning a thrilling finish, the same rating given to Logician for winning last year. He is undefeated in four races in 2020, has improved with every run and looks well up to standard for a St Leger winner.

Berkshire Rocco earned a career-high 116 for finishing second. He got his revenge on Santiago (fourth here) who had beaten him in the Queens Vase, the pair of them that day more than eight lengths clear of the field.

The Queen’s Vase has thrown up in recent years, winners such as Stradivarius and Kew Gardens and has overall proved a wonderful nursery for top class horses since its distance was clipped in 2017 from 2m to 1m6f.

The eye-catcher of the race was Pyledriver who retains the 119 rating that he earned in the Great Voltigeur over two and a half furlongs shorter. There he beat Berkshire Rocco as well as Mogul, an impressive winner of the Grand Prix de Paris at Longchamp on Sunday.

Pyledriver missed out here by only about one fifth of a second but even so it was his courage that kept him in the fight as his stamina was stretched to its limit. He had every chance a furlong out but then became a bit wayward under pressure, a clear sign that Pyledriver was tiring as his stamina waned.

He is still rated as the best horse in the St Leger according to his 12f form.

Stamina was also an issue for others down the field, including Hukum in fifth. His impressive win in the Geoffrey Free last month was over a furlong less and on ground with more give in it. I am still confident that there is more improvement to come from Hukum.

We have him running to 112 in the Leger but his 114 handicap mark (achieved at Newbury) remains unchanged.

It seems to have taken an age for the two-year-old season to get going following this year’s delayed start but the autumn Group 1 races are shaping up nicely now. Not only have top-level races already been staged in France and Ireland, including two on the weekend just gone, but Doncaster’s St Leger meeting saw a couple of British-trained juveniles who need factoring into the equation for top honours in the coming weeks, writes Graeme Smith.

The market for the bet365 Champagne Stakes was dominated by two of the year’s most exciting colts and, along with the Irish challenger, State of Rest, the pair enhanced their standing as the front three drew some seven and a half lengths clear of the field.

Both Chindit and Albasheer came there travelling beautifully with two furlongs to run, and while the more battle-hardened of the pair emerged victorious both colts look exciting prospects.

Chindit already had a Listed success to his name from the Pat Eddery at Ascot, and the strength of that form gave me confidence in the principals’ efforts in the Champagne being as good as they seemed. Chindit’s rating increased by 8lb to 115, and I gave the Pat Eddery a further retrospective rise.

Albasheer has quickly proved himself smart and his opening mark is 112. That’s quite an achievement considering he barely turned a hair and probably didn’t learn much when winning at Doncaster in July on his only previous appearance.

I have State of Rest also improving to a mark of 112, though his official rating is a matter for the Irish handicapper. Incidentally, he looked more of a galloper than the first two to me and an increased test of stamina and/or more positive tactics may see him improve further.

The May Hill Stakes saw John Gosden roll the big dice with Indigo Girl just eleven days on from one of the most captivating debuts of the entire season and the sister to the Group 1 winner Journey found it well within her capabilities.

Journey had looked potentially quirky early in her career and it was noticeable that Indigo Girl hung left and appeared to idle once in front, though that could easily just be greenness at this stage.

Mention of the bet365 Flying Scotsman all but guarantees repeated mentions of Frankel, and while it’s hard to imagine any of this year’s crop scaling those heights it had the look of a deep Listed race – two of the eleven had been placed in pattern company within the last month and New Mandate and Laneqash drew away in an excellent time.

This was a significant leap forward from New Mandate’s nursery success, acknowledging he’d appeared to have something in reserve that day, and at 108 he’s on the cusp of pattern-winning standard now – 110 has been enough to win the Somerville Tattersall Stakes in three of the last five years.

He was notably brave as Laneqash (107) repeatedly hung into his path.

Elsewhere on the juvenile scene at Doncaster, the Group 2 Flying Childers Stakes saw a close-fought finish between horses at opposite ends of the market, with Nigel Tinkler’s Ubettabelieveit narrowly prevailing over warm favourite Sacred, writes Adam Barnes.

A key feature of this contest was the field racing in two distinct groups, with Ubettabelieveit racing in the larger centre group, while Sacred had just two others for company on the near side.

While the tight finish makes it difficult to argue that there was a definite bias as such, the visual impression was that Sacred wasn’t helped by having to make her move largely isolated, in contrast to the winner who enjoyed a nice trail into the final furlong in his larger group.

Such was the closeness of the finish, the way the race panned out possibly made the difference on the day.

Such speculation aside, this was still clearly an improved performance from Ubettabelieveit, who appreciated the return to the minimum trip after racing too keenly over 6f on his previous outing. He’s now 3-3 when encountering 5f on a sound surface.

In terms of the level of the race, Ubettabelieveit is now rated 108 (up from 101), which is towards the lower end of the range pointed to by historical standards. It’s worth noting that the time of the race was distinctly moderate, though that was at least partly due to the early pace being slower than par.

The proximity of rank-outsider Burning Cash in fourth also raises a slight question mark over the form, though he’s given full credit for this much-improved effort for now, with his rating leaping from 80 to 103.

Although Sacred didn’t quite match the form of her Lowther Stakes second, she remains on 108. 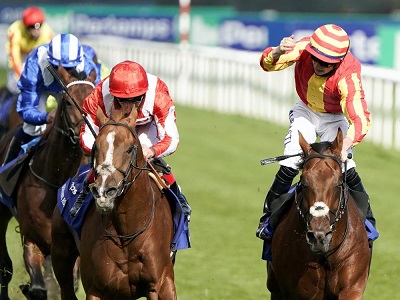 The reasoning behind Marracudja's new rating

A Fighting seventeenth for the north

The star dual-purpose trainer shines a light on those who can cap a superb season on the Flat...
bet365
Sign up to bet365. Click to View Bonus Code Details

New UK customers only. £10 Min Deposit. 100% matched free bet on your first deposit of £10. 1 x wagering at odds of 1.75+ to unlock Free Bets. Debit Card & Paypal deposits only. This offer is valid for 7 days from your new account being registered. Full Terms apply.