Laurent Barbarin has five ex-French horses for your ATR Tracker this week, including horses who have now joined the powerful yards of Gordon Elliott and Paul Nicholls.

unibet
Up to £40 in bonus funds

Unplaced in both starts on the flat in France in August 2017, he won the coveted Prix Pride Of Kildare at Auteuil on his first attempt over hurdles at the end of September the same year.

He finished last of ten in his next start in the Grade 1 Prix Cambacérès, a race won by the hugely talented Master Dino. He is a son of Sunday Break and out of a dam that was placed once in two starts over hurdles. His half-brother Garfield (by Doctor Dino) has won two of his three starts over hurdles in 2019 for François Nicolle and ended the season with a third place in a Grade 3 hurdle at Compiègne.

Espion Du Chenet obviously what it takes to win more races over jumps now in UK but he has been off the track for a long time and could need to get back into rhythm before he is seen in the winners’ enclosure again.
Entered Sunday at Leopardstown 3.05

This son of the successful Cocoriko is an AQPS horse, out of a dam that was a winner on the flat in France and was also placed twice in five runs over jumps. She has produced two winners (including Fingal D’Arthel) from eight to run thus far.

Fingal D’Arthel ran three times on the flat in the French provinces before he was exported to UK in May last year. He was fourth of fourteen first time out over 1m4f at Machecoul in February and showed some nice progress when second to Fix Sun (2 victories and one place from three starts over hurdles in UK) at Paray Le Monial one month later.

He finally opened his account back at Machecoul in April ahead of nine rivals, in a race that has since produced only one winner in France (over fences). He was beaten a long way on his local debut over hurdles at Sedgefield at the end of December and will need to show vast improvement to pose a threat if he is to run this Friday at Doncaster.
Entered Friday at Doncaster 2.35

Sold for €2,000 as a foal at Arqana in 2013, Burdigala registered only one success from 38 starts in France. He ran alternatively on the flat, over hurdles and over fences to finally break his maiden tag at age 5 in a modest steeple-chase at Nancy on his 33 outing.

Exported to England in September 2018, he was well beaten in his first and only run for Micky Hammond so far, in a Novice hurdle at Wetherby in December 2018. He is by Way Of Light and out of a mare that was placed once in four starts in UK and France, and has produced four winners from six runners.

Burdigala’s only success in France was in a steeple-chase and although he is entered in a handicap hurdle this week, it may be safe to say that his best chance of winning a race in UK could be over fences.
Entered Friday at Doncaster 5.15

A winner of his first start on the flat at Sablé Sur Sarthe in September last year over 1m6f, he defeated Giga Star that went on to win a Grade 3 for AQPS and was fourth in a Grade 1 bumper at Saint-Cloud in November.

Beaten ¾ lengths in his next start at Nantes over 1m4f on 4 October, Galet D’Oudairies was exported to Ireland 11 days later. By Racinger, he is the only winner from three runners out of Suite D’Oudairies who had failed to place in six runs on the flat in France.

He finished fifth of 25, beaten 21 lengths on his Irish debut in a maiden hurdle at Fairyhouse last month. He jumped off at 15/2 under Davy Russel that day and should be able to win a race of this nature in the near future.

As always, the more time these AQPS are given, the more successful they are likely to be. He should turn into a decent horse next winter.
Entered at Navan this Saturday 1.45

Previously trained by Jean-Paul Gallorini in France, Red Risk got off the mark at Auteuil on his third attempt over hurdles at three, beating the very useful Fandango on this occasion. He subsequently was twice unplaced in Group company before showing a rebound of form when second to Saint Sonnet (beaten 15 lengths) at Auteuil in a conditions hurdle in his last start of 2018.

He raced only three times in 2019 and won over fences at Auteuil in September, beating a modest bunch of horses in what was his last run in France. Third of four on his UK debut over fences at Hereford at the beginning of January over 2m, he jumped off as even money favourite that day but obviously did not run up to expectations.

He could be interesting over longer trips when he gets older as his dam (although a Grade 3 winner at four) ran her best races at five when she finished second in the Grade 2 Prix de La Barka over 2m5½f and was subsequently fifth in the Grade 1 Grande Course De Haies d’Auteuil over 3m1½f.
Entered at Ludlow this Thursday at 2.15 and at Kelso Saturday 2.12 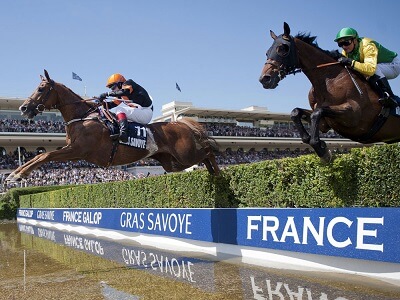 Triumph hopefuls on show at Fairyhouse

Mullins poised to take the wraps off Lamarckise and Lucky One.

Floueur could be a smart recruit for Gordon Elliott

Nicholas Godfrey on the Saudi Cup